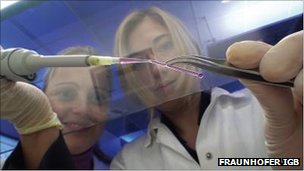 A news story only a few weeks ago reported on how 3D printing was being used for the creation of models of body parts for study by surgeons, now though German scientists at the Fraunhofer research institute have gone one better. 3D printed body parts are the future it seems and the German team has started off using a rapid prototyping service to print artificial blood vessels. A blood vessel may seem quite simple but it isn’t, hence why artificial ones haven’t been made before; the level of detail required is extraordinary, microscopic in fact. The microscopic detail could not be made with any manual production techniques or any techniques that would cut down a piece of material to the complex structure. The fact that rapid prototyping services using 3D printers have been developed to build items up using the addition of tiny amounts of material at a time is what has allowed artificial blood vessels to be produced.

The team has had to take the 3D printing technology a little way beyond what existed for rapid prototyping services but it is fundamentally the same technology being used. The main difference between the 3D printers that print blood vessels, and in future potentially organs, and those for rapid prototyping services is the level of detail possible. A CAD design from a computer is still used though to produce a model that then needs to be given the quality of organic material. The other part of the process is combining the 3D printer with lasers to complete photon polymerization on every piece of material added to bind it to its neighbors in an elastic manner. Being able to create elastic but very detailed vessels is key as before the vascular system couldn’t be used on an artificial body part to provide nutrients needed, or in the case of a blood vessel to extract them from the blood and move them to the body part that is being served.

The project is still in its own rapid prototyping stage currently and all constructions of vessels are for tests only, they are working on getting the artificial cells and real cells to bind, which requires the injection of biomolecules.

The future for this technology goes beyond blood vessels, though the importance of being able to make new blood vessels shouldn’t be underestimated, the future could see organs made and in a way that would ensure they were the same healthy structure every time: though size of organs could be easily changed to suit the patient. For any organs made with 3D printing the inclusion of blood vessels is itself likely to be vital and the most complex part of many organs, meaning that perhaps the hardest part of creating organs in this way is already completed.

As with many things in science research may do a complete circle, rapid prototype services using 3D printing may well benefit from the technology developed by the German team. The creation of elastic parts made using 3D printing is currently not possible with conventional 3D Printing which limits what can be created in a 3D printer even at the point where moving parts, metal parts and circuit boards can be printed.