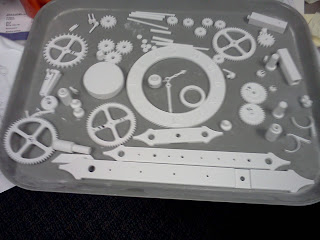 As an example of the precision with which 3D Printing services can create parts from 3D CAD files it is a fantastic example: Z Corporation’s engineer John Luongo has created a precision timepiece using a Z Printer.

Mr Luongo had a passion for clocks already and started experimenting with a Z Printer to make all of the parts for one therefore. The design he used was based on a wooden clock and the design already existed as a 3D CAD file. A quick conversion of the file later it was ready to be sent to the 3D printing service for a first draft.

The result were the pieces of a clock that then had to be fitted together still but which were made to the exact dimensions so that the clock once put together kept perfect time. To keep perfect time the clock’s 70 pieces including various cogs and wheels had to be made exactly the right size and shape. 3D printing services are increasingly used for rapid prototyping and Z Corporation will primarily use this example to show how even with precision parts a 3D printing service can test a design and then be used to plan an assembly line

Mr Luongo’s second model was the clock now in full color and designed to be easier to assemble and requiring less parts; again this process is exactly how 3D printing services are used for rapid prototyping. A company who can before setting up production of a product minimize the amount of work involved in assembly and maximize the speed of assembly can of course cut costs; less pieces also means less work and less machinery needed, again this keeps cost per unit low.

After Mr Luongo posted a blogpost on Z Corportaion’s website about creating his clock using the 3D printing service a discussion emerged with those reading and commenting on the post. As fans of Z Corporartion’s Z Printers know the printers are capable of printing moving parts and Z Corp have posted demonstration videos on Youtube and elsewhere before. The demonstrations have involved simpler designs with moving parts but in theory 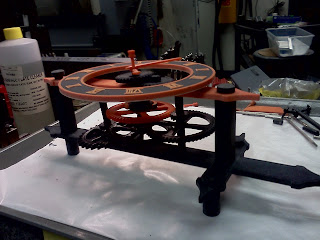 Mr Luongo explained how the ideas of the project was to show how the Z Printer can beused for rapid prototyping where it is parts that are important in some cases.

3D printing services could he confirmed potentially print working pendulum clocks fully assembled though and Mr Luongo went on to comment on how this could change manufacturing and drastically cut costs, and of course not just for clocks.

If the cost of materials for 3D printing can come down surely 3D printing services that make pre assembled items can become a viable alternative to even tooling techniques for the most mass produced goods. Already for small quantities of finished products 3D printers and 3D printing services are becoming an increasingly large proportion of Z Corp’s business. Z Corp have already drastically decreased the cost of 3D printing and will continue to do so.